Are we ready for dark skies?

Are we ready for dark skies?

WSP Middle East‘s Head of Lighting Design, Paula Cortés debates the opportunities and challenges surrounding implementing darker skies in cities in the Middle East, and whether the people are ready.

This article is part of a series about dark skies. Click here to read part 1.

Implementing techniques to achieve darker skies can be an excellent way to preserve our environment and help city residents to slow down and find a healthier balance between a city and countryside lifestyle – but do they want to?

The Middle East’s major cities are known for their fast-paced and exciting lifestyles, but they still attract a high number of expats and residents, many of whom have moved from smaller cities and towns, or more relaxed countryside destinations to live the big city life. Would people really accept dark skies in our cities, or does it suit people better for dark skies to be reserved for areas outside of the city that people can visit when they choose to?

Many of us believed that remote working and other impacts of the pandemic would lead to an urban exodus and encourage movement of city workers to more rural areas. However, as soon as cases began to decline, people returned to the inner cities at a quicker rate than expected. Despite more companies than ever offering remote working opportunities, people are still choosing to reside in cities, many of them enjoying nightlife activities and opting to live in the busiest and more lively or active areas – indicating that residents aren’t looking to slow down.

With brightly lit cities being a major draw for tourism, commercial opportunities and other kinds of business that have created such success for the Middle East, will it seem contradictory to begin implementing light reducing measures? There could be a risk of driving away residents and businesses, and perhaps without a great enough draw for those who are supporters of dark skies.

With brightly lit cities being a major draw for tourism, commercial opportunities and other kinds of business that have created such success for the Middle East, will it seem contradictory to begin implementing light reducing measures?

Leaders in other regions are concerned about the implications for residents and the economy
In Spain we can see some back and forth between leaders in the country with varying perspectives on the recent energy saving laws put in place, so one might expect a similarly mixed reaction in the Middle East.

A law was approved in Spain that requires shops, supermarkets, public buildings, and places of worship including tourist attractions to turn off their lights by 10pm. However, Spain’s President did not agree to turn off the lights in the capital city of Madrid due to her concerns that the darkness will cause “insecurity, poverty, and sadness.” Calls were also made for a reduction in the number of lights put up during the festive season, to which Madrid’s Mayor refused, stating that they are a “tourist, commercial and economic attraction for the city”, although he did agree to ensure they were energy efficient.

There is also concern among leaders of countries that have enforced similar rules, about the cost implications. Despite the initial costs, updating all lighting fixtures to produce more sustainable lighting will result in long term savings from more efficient direction of light and less wasted light, meaning less energy is required to produce the same amount of usable light in an area.

The light reducing measures in Spain will have a positive environmental impact and will help the country towards its target to reduce gas and oil consumption by 5%, as well as help with possible fuel shortages throughout the winter. Other countries have adopted similar measures including France, where consumption is reported to have decreased by 25%.

Do we need light for safety?
An interesting question to ask regarding the President of Spain’s concerns is why do we feel safer in well-lit areas, and are we actually?

While there are fears that less light may convey an image of less security and less comfort for people in the city, studies suggest that lighter doesn’t mean safer, even though we may feel it.

The evidence is conflicting as there are so many other factors that are more important to our safety, but studies have found that dimming or switching off lights does not result in increased crime rates. Evenly distributed lighting might be more important than bright lighting for people to feel safe.

Perhaps it is worth having brighter cities for our own peace of mind, but is it worth the trade-off for the negative health and environmental effects?
Another thing to consider is that by reducing or removing city lighting to protect wildlife and help residents become more in touch with their circadian rhythms, we may end up drastically reducing social interactions and the number of minutes spent walking per day and result with alternative negative health impacts for the community.

The moon and stars used to be bright enough on their own for humans to move around safely, we just haven’t allowed this adjustment to take place for us to realise it now.

Navigating at night is difficult without well-lit streets, but this may be because we are so used to the streets being so brightly lit.
When our eyes are adjusted to darker skies, they adapt so that we can see what we need to see. The moon and stars used to be bright enough on their own for humans to move around safely, we just haven’t allowed this adjustment to take place for us to realise it now. However, this might feel like a big and daunting step. 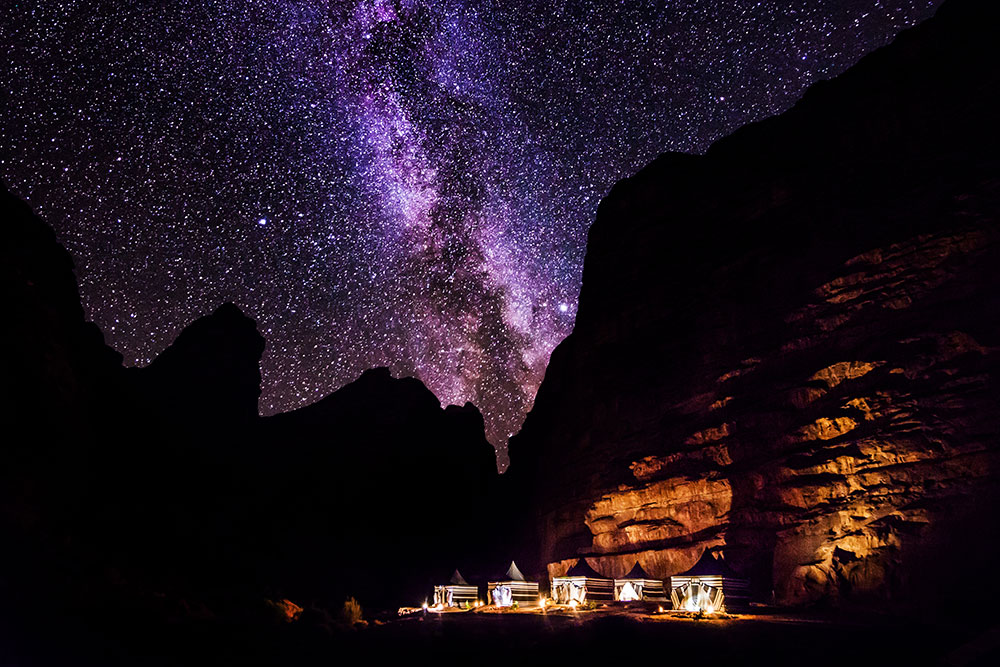 What are some of the regulations surrounding our use of lighting in cities?
Guidelines and regulations surrounding our use of lighting and that aim to reduce light pollution will be effective in ensuring clients and designers abide by the same rules and ensuring the desired outcome is achieved. Without this, there will be too many conflicting priorities and motivations.

In Saudi Arabia we are seeing some stricter regulations being introduced with regards to energy consumption and lighting levels as part of the ASHRAE, LEED, and Mostadam standards.

Projects are required to comply to 65% of the regulations in total. In some ways this allows a little more leeway with certain elements, but at the same time it makes designing more challenging due to the need for designers to incorporate a strategy for how they will reconsider different parameters within the designs.

We may wonder whether it is a reasonable trade off to switch our brightly lit cities for darker skies, but we shouldn’t need to completely forego one for the other. The best solution right now might be to find solutions that prevent negative effects while allowing the positive.

What can we do to reduce light pollution in cities?
We may wonder whether it is a reasonable trade off to switch our brightly lit cities for darker skies, but we shouldn’t need to completely forego one for the other. The best solution right now might be to find solutions that prevent negative effects while allowing the positive. In part 3 of this article series we will look into some specific recommendations for lighting strategies that will address light pollution in cities.

As lighting designers, it may seem unusual to be considering how to incorporate darkness into our work, but now we are reaching a pivotal point where we can embrace a new understanding of darkness within future ready lighting strategies to bridge the gap between dark skies and lighting.

Now that many more destinations and groups across the region are advocating about dark skies and the impacts of light pollution, perhaps the region is already on track towards gradually starting to gain greater awareness and support. This is important for darker skies in our cities to be a possibility, but until the market and the people are ready this is likely to progress slowly. 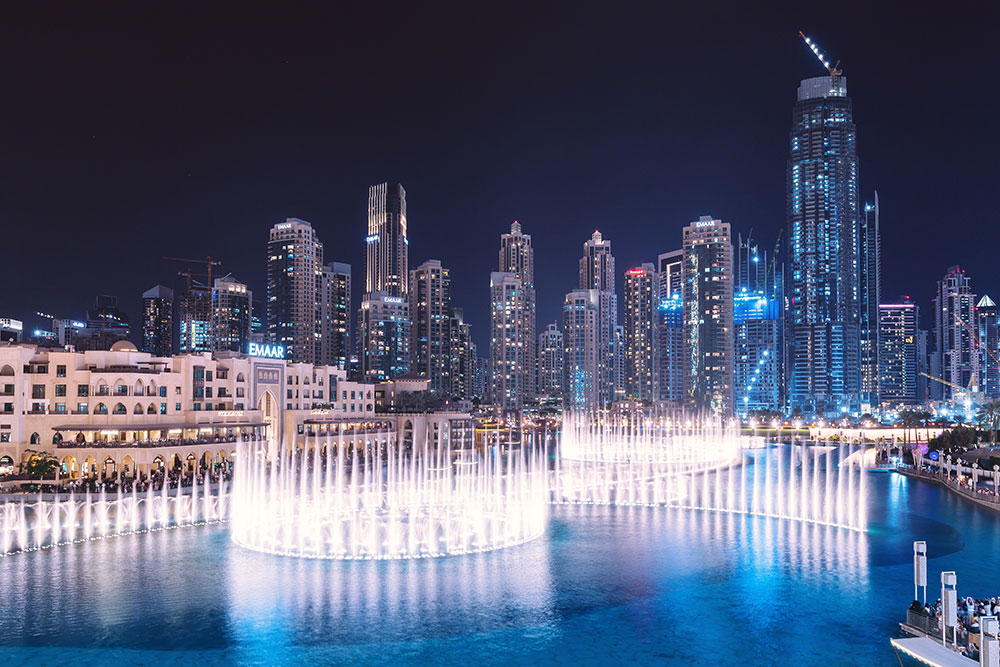 Cities are diverse and have diverse requirements. Our goal as lighting designers is never to unify the look and feel of different neighbourhoods, but to accentuate their use, dynamics, and requirements, through the correct implementation of lighting solutions.

Dark sky guidelines are not set up with the aim to simply have all lights turned off at night, but to provide options that can create improvements across different areas that will help cities to operate more efficiently while creating economic, environmental and health benefits as a result.

Cities are diverse and have diverse requirements. Our goal as lighting designers is never to unify the look and feel of different neighbourhoods, but to accentuate their use, dynamics, and requirements, through the correct implementation of lighting solutions, brightness, timings, lux levels and other elements to achieve the desired outcome.

The International Dark-Sky Association stated “There is a difference between well-lit and brightly lit. It is possible to have a well-lit town with low levels of light pollution” so perhaps the best route for the Middle East to take at this stage is to tone down the excess light and make gradual improvements, without turning it all off and changing the lifestyle that currently suits its many residents.

Paula Cortés is WSP Middle East’s Head of Lighting Design, who brings a decade of lighting design experience from a variety of international projects. Her goals are to foster industry discussion about sustainable lighting solutions in the region and to develop unique concepts and outstanding designs that are recognised across the region.